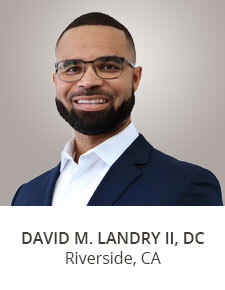 Dr. David Martin Landry, II was born and raised in Southern California and from a young age, he enjoyed helping and inspiring others. Making a difference for people became his life vision at an early age. As a senior in high school, Dr. Landry decided to become a Chiropractor. In doing so, he soon realized Chiropractic gave him the perfect opportunity to help educate his community and achieve improvement in their overall performance in life.

Dr. Landry attended California Baptist University in Riverside, California, and in 2005, graduated with a Bachelor of Science in Kinesiology. From there, he relocated to Minnesota and in 2009 obtained his post-graduate degree in Chiropractic from NorthWestern Health Science University. Shortly after graduating from Chiropractic college, Dr. Landry took his knowledge of Chiropractic to South America to the country of Peru. There, he lived in the cities of Trujillo and Lima for a duration of 3 years. Dr. Landry was able to immerse himself fully into the culture and picked up the Spanish language. With this, he was able to successfully complete his first full Spanish radio interview, in just under 10 months of living there.

During his time in Peru, Dr. Landry was able to explain the benefits of Chiropractic while doing 2 local and 2 nationally syndicated televised interviews completely in Spanish. While in Peru, Dr. Landry maintained a consistent patient base of some of the most influential and well-known national Peruvian surfers. Now, Dr. Landry is determined to bring the same energy, love, and compassion to the City of Riverside.