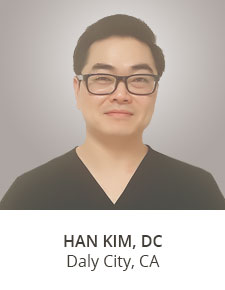 Dr. Han Kim was born in South Korea and immigrated to the United States as a child. His family eventually settled in the San Francisco Bay Area, where Dr. Kim would spend most of his formative years. Through life experiences, he learned the importance of health and developed a passion for helping others. While attending college at Cal Poly SLO, Dr. Kim discovered chiropractic and immediately became fascinated by it. Shortly thereafter, he decided to change career paths and pursue chiropractic.

Dr. Han Kim provides chiropractic care to improve the health and function of his patients. He addresses the individual as a whole and determines the best care plan for the patient. He utilizes a variety of techniques/methods to assess, treat and evaluate his patients.