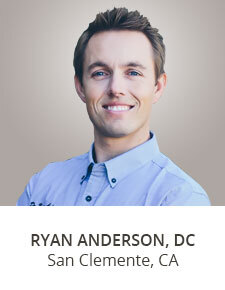 Dr. Anderson grew in Yorba Linda, CA where he attended Esperanza High school and played football there. He then continued his studies in Chemistry at the University of California Riverside.  Following his undergraduate studies, he made the best decision of his scholastic career and attended the Southern California University of Health Sciences, where he attained his degree as a Doctor of Chiropractic.

Dr. Anderson started his San Clemente practice in July of 2013. Personal injury has been a large part of Dr. Anderson’s career. He is always continuing his education in learning how to better treat those who have been involved in a motor vehicle crash or other types of injuries. While not a goal of working with injury claims, Dr. Anderson does have experience with been deposed as a treating physician. Attorneys know they can trust Dr. Anderson with their clients. Dr. Anderson typically practices Chiropractic in the form of Manual manipulations. Other modalities utilized in the office are activator, F/D, Thompson drop, MRT, Kinesio-taping, NMR, massage therapy, Digital radiographs, and Laser Therapy.

Married for 8 years to his best friend Danielle Anderson. They spend all of their free time with their two children Rex and Sage.