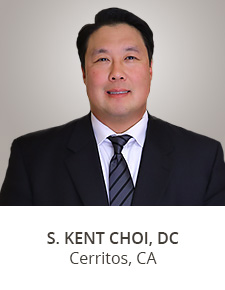 Dr. Choi was born in Los Angeles in 1971 and spent most of his formative years in Northern California (San Jose, CA). He is a graduate of Bellarmine College Preparatory High School. He excelled in sports: Tennis, Track & Field (Shot Put/Discus), and Football. He also excelled in academics. He was granted admission into U.C.L.A. and earned a Bachelors of Science degree in Physiological Science. He continued his education and enrolled at the Los Angeles College of Chiropractic (L.A.C.C.) where he continued to excel academically. He was accepted as an academic tutor in the Mentoring Program at The Los Angeles of College of Chiropractic and was able to help many students in the areas of orthopedics, biomechanics, radiology, microbiology, and physics of clinical imaging.

Dr. Choi started his practice from humble beginnings in March 2001. His practice grew steadily over the next 10 years and has flourished over the last 6 years. He has developed a keen interest in and has become an expert in the field of PERSONAL INJURY (PI). Where many doctors run from PI cases, Dr. Choi runs head on towards them. Attorneys from all over Southern California trust him with their clients. Attorneys often recommend that their clients drive 20-45 minutes to be under Dr. Choi’s care. Dr. Choi regularly teaches and mentors doctors regarding the history, physical examination, diagnosis, and treatment of Motor Vehicle Collisions (MVA’s).