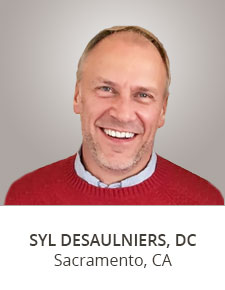 Chiropractic has been a long part of Dr Syl’s life. At the young age of 5, Dr. Syl was hit by a car. This accident left him with a spine that was more susceptible to dysfunction and back issues. He received his first Chiropractic adjustment shortly after the accident and has been receiving them ever since. Dr. Syl Desaulniers attended Life-West Chiropractic College in 1983 and graduated with his Doctor of Chiropractic in 1986.

He began working for Danville Chiropractic as an Associate Doctor in Danville, California where he provided quality Chiropractic adjustments as well as Nutrition Counseling and Rehabilitation. He later opened his own practice called HealthQuest in Sacramento, CA in 1990 where he began specializing in motor vehicle accident injuries and also incorporated Nutrition and Functional Medicine. He now owns and directs Zero Limits Chiropractic Sacramento, California specializing in acute, chronic and challenging conditions.